The material of new soarondoresu was offered in January, 2011.
The designer is Ritsuko Shirahama. The model is Tamaki Kenmochi.

It enjoyed it in Tamaki Kenmochi, and moreover, our company came to a company, and enjoyed Fukui. 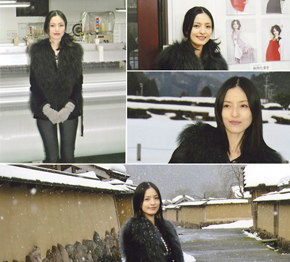 ※This photograph obtains and publishes the consent to Tamaki Kenmochi.

Three in March, 2011. It participated in "Fukuitekisutairusute-ji" in fukui minami Aoyama 291 on the 4th.
It came to the actress's tamaki Kenmochi assistance. 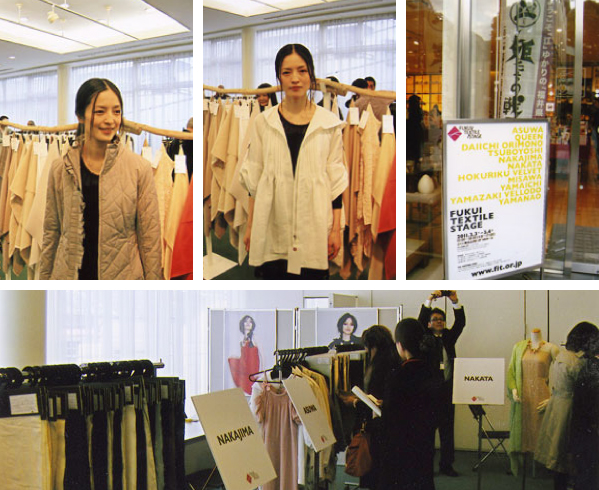 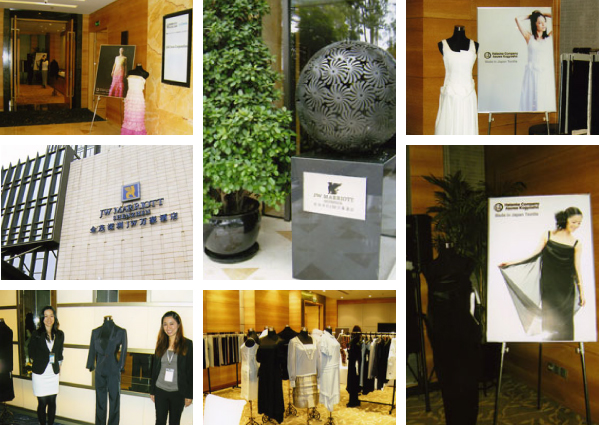 Fashion weekly magazine WWD Japan March 28, 2011 vol.1626
Home enterprise that supports material manufacturer
It is a textile enterprise in the fiber home in Hokuriku (Ishikawa, Fukui, and Toyama) and Shizuoka, etc. to have supported the textile development of synthetic fiber and the spinning manufacturer. It weaves and it knits within the country, it doesn't have the equipment of the dye and the processing, and the material manufacturer, especially the synthetic fiber manufacturer has developed the textile together with a local small and medium-sized enterprise. The each stage of work is in the system of the division of labor, and the textile development with depth has become possible because it cooperates with the home where of each has original knowhow. The influence of the material manufacturer is strong until the 90's, it becomes an interdependent relationship, and the home enterprise of the affiliation that is also is starting a new approach with each knowhow as the weapon now. For instance, the field hill (Fukui Prefecture, [Shigeru Hataoka], president) that is one of the excellent partners of Mitsubishi Rayon and the textile develops the material that does the collaboration, "[Ritsukoshirahama]", and has widened sales to foreign countries.
Photograph: "[Soaron]" textile that does collaboration, field hill (Fukui Prefecture, [Shigeru Hataoka], president) is "[Ritsukoshirahama]" and develops. The model is actress's [Tamaki Kenmochi].

The newspaper of economy of Japan  November 4, 2011
A way out to high-class dress and ornaments.
Prada, Louis Vuitton, Issei Miyake The maker of the cloth supporting a high-class dress-and-ornaments brand is in Fukui. Hataoka who deals with Mitsubishi Rayon-oriented synthetic fiber processing. When a textile industry falls into a predicament with a strong yen after the Plaza Accord, in quest of a way out, the customer has been reclaimed in the high-class fashion. The various cloth sample of pulp or a polyester material is located in a line with the warehouse of the factory side. About 1000 points are made only from a trial product every year. "Useless only in the work of Takumi (skillful) by a craftsman. Especially [ there are efforts to sell ]." Shigeru Hataoka (60), the president, crowds a bag and he runs about the inside of the world. In addition to the merit of a material, the adaptability according to an order also calls a small quantity a strong point. Now, a sales overseas ratio is 70 percent. There is an inquiry also from the designer of Russia or China these days. If you notice, it will be to the brand of a brand community. "A strong yen is not dreadful. it is that a customer's intention disappears -- asking with what kind of value some strong points of" (Hataoka)
company can provide consumers is continued The measure will be one step to the world brand which rebounds a strong yen.

The newspaper of Fukui December 9, 2011
Tour around textile factory technical appeal
Apparels outside the prefecture and trading company staffs were invited, and the tour "Japan FukuiTextiles" involving the factory of a textiles company started in Fukui on the 8th. Each company advertised the high technology of the textiles from a prefecture, explaining a process of operation to a tour participant. It continues in May sponsored by a prefectural textile industry association, and is the 2nd time this year. 37 students participated [ the apparel outside the prefecture, the trading company, the individual designer, and ] in tour. being divided into four groups Leihoku it turned at a time around two companies of a total of eight companies. In the Asuwa industrial place (President Shigeru Hataoka) in Inazu-cho, Fukui-shi which nine persons visited, the person in charge explained the loom of the air jet which lets the woof pass with a thread plying machine or air, and a water jet. After the factory tour, the participant was checking the height of quality, while the cloth sample etc. which were woven with thread of reproduction polyester checked a feel of the company's products, etc. One of the participants who are working for the apparel company in the city of Tokyo is moved deeply, saying, "The high level of domestic technology was realized anew."
Nine days are a Senkyo building and hold the show by 14 partner companies. The past textile, the textile for materials, etc. are put in order.